Part of my method of research involved taking part in a number of rallies and events to experience and better understand group lobbying and activism as well as lectures and events relating to contemporary feminism.

3 of the events are documented here:

Richard Pankhurst alerted me to a new feminist lobby group, as his daughter Helen Pankhurst would be taking part, dressed as a suffragette. I signed up for the event and took part in the UKFeminista lobby of parliament ukfeminista.org.uk/event-details/feministlobby/

At this event we were invited to write to our MP requesting a meeting, or green-carding our MP on the day of the group lobby. In the morning we were reminded of the 4 key areas of the lobby with representatives making short presentations to outline the issues. We were then invited to join the rally and walk from the meeting hall to Parliament Square. We gathered there in our constituency groups and went to meet our MPs, either in Parliament meeting rooms or in Parliament Square as per our arrangements. A small group of us met with our MP for Southwark and lobbied on the 4 issues. The overall impact of the day was that it made me feel empowered to lobby, and to feel that Parliament very much belonged to people and was surprisingly easily accessible. It made my MP feel more accessible and responsive. For participants it was an opportunity to discuss issues that bothered them on a daily basis and feel that if we came together we could do something about it. The lobby was concerned with media objectification, childcare, violence against women and the status of women refugees.

Kat Banyard, one of Britain’s leading young feminists, talks about the issues identified for the lobby she led: 'We were sold a lie on an almighty scale, that equality had been won, the battle was over' 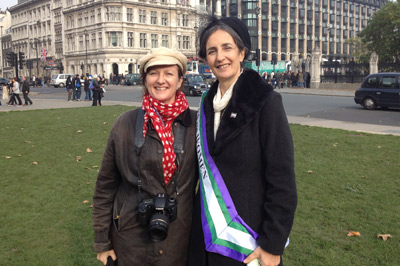 Where are all the women, and what’s holding us back.

I heard of the 50 ft women event through an email circular forwarded by a colleague from another university. I signed up and went along.

Chaired by Kira Cochrane, the panel was made up of Nan Sloane, the director of Women and Democracy, Baroness Lola Young, a member of the House of Lords, Emeritus Professor at Middlesex University and the former Head of Culture at the Greater London Authority, and Miriam O’Reilly, who is a broadcast journalist and estab¬lished the Women’s Equality Network after being the first woman to suc­cessfully sue the BBC for age dis­crim­ination, in a high-profile case in 2011. Details of the event are ably summarised on the 50 Ft women blog here: www.50footwomen.co.uk/?p=813

The 2012 lecture took place on Friday 17 August at Wortley Hall, near Sheffield

“Divide and Rule - the oldest tactic in the book”

“After all, why would men readily hand over their power in the home and in society? They may have to go out and be a wage slave but at home they have ruled the roost and been waited on hand foot and finger. Even when women increasingly went out to work, mysteriously they still did the majority of household work and childcare at home. A recent survey showed that this is still the case.”

Pdf of the lecture: sylviapankhurst.gn.apc.org/SPML%202012.pdf

The Sylvia Pankhurst Memorial Committee organized the lecture, held in the Sylvia Pankhurst Library at Wortley Hall, Sheffield, UK. When I arrived in the bar, before the lecture I was greeted with a welcoming ‘hello comrade’ and I knew I was in for something special. A curious mix of women, young and older, and a smattering of men were there.

Introducing myself and my purpose for attending as someone who was making a film about Sylvia Pankhurst I was met with some mixed responses as many people were protective of what they know about Sylvia and seem to feel that she was theirs. A few people were showboating their knowledge of Sylvia in the Q&A after the lecture and it was a lively session where a number of people tussled and enjoyed the discussions. Overall, I was gratified to find that Sylvia lived on through these curiously diverse champions, with a library named after her and a plan to erect a statue to Sylvia in the near future, if a suitable site could be found. 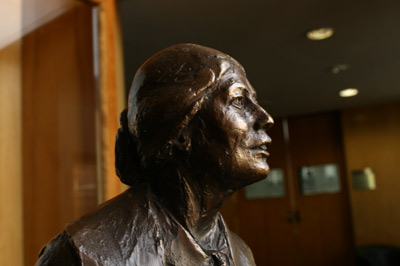